lieplich beslozzen
is a piece for solo instrument and prerecorded digital audio. The main part of the 'tape voice' is played from a stereo CD. Further channels are installed in 6 groups of 4 plastic bottles, each containing miniature individual loudspeakers, which are hung around or among the audience in the performance space.

Starting point for this piece was the sound of the recorder, the characteristics and (sometimes contradictory) cliches of the instruments: 'lieplich' (medieval spelling of the German word 'lieblich': sweet, charming) pure, direct, innocent, simple, cheap, naive, vulnerable,... The sound is dealt with in a phenomenological manner (for example regarding the variations of articulation) but expression and playfulness are not excluded. The recorder sounds coming from the speakers were modified electronically in various degrees of transformation but relationships to various aspects of the 'original' recorder sound always remain.
The piece also has an installation aspect: The installed sounds are 'beslozzen' (locked up) in plastic bottles (washing detergent containers) hung around or among the audience in the performance space. The miniature loudspeakers make the sound more edgy. Hard attacks and low frequencies are distorted in contrast to high frequencies which emenate out from the tops of the bottles and spread in the performance space. 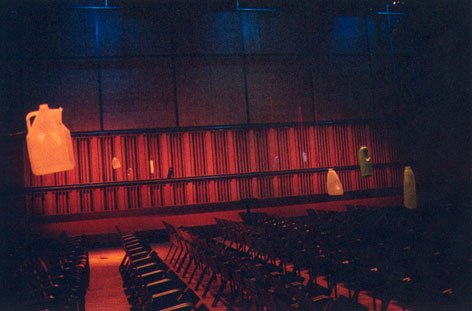