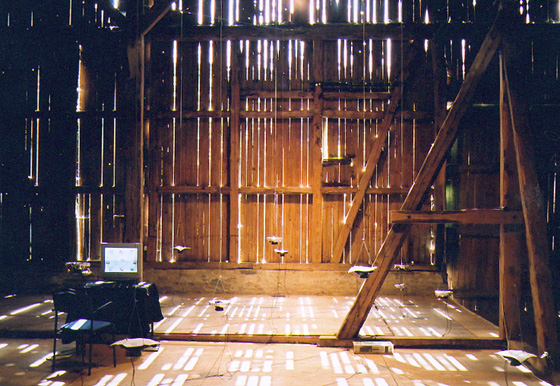 The idea for this installation came up in the sales room of a ceramics factory while outside an jackhammer was being used at a construction site. Via the deep vibrations of the jackhammer travelling through the floor, shelves with the ceramics began to shake and in turn created bizarre sounds.
18 loudspeakers were dispersed in a barn at the artist residence Höge. Sine tones and pre-recorded sounds from instruments as well as recordings made at the Höge and its surroundings (while in residence in summer 2002) are played back through the speakers. Small objects that were found and bought in towns in the area (including lots of 'cheep objects' made in China) are placed on top of the loudspeakers. The objects are 'animated' by specific frequencies. The frequencies cause different objects to jangle and distort and change the overtone structure of the sounds of the composition at different times. In the installation, a computer controls the sequence of sounds and allows listeners to change distinct parameters of volume and frequency and thus influence the buzz of the objects. Photographs that appear on the computer screen refer to the origin of the objects and sounds.
The work exists in two forms:
1. as concert installation with bass clarinet and violoncello
2. as interactive installation: listeners can select and alter frequencies and volume via an interactive software thus altering the way objects vibrate and resonate.